This variety has sometimes been referred to as Coatlán Zapotec, but there is another, mutually-unintelligible variety of Zapotec (ISO code zps), spoken in and near Santo Domingo Coatlán, to the south of the San Vicente Coatlán area. This variety has also been called Coatlán Zapotec, and in fact is so listed in the Ethnologue and the ISO catalogue.

There are about 3800 speakers of the language in the town of San Vicente Coatlán, according to the 2000 INEGI census. 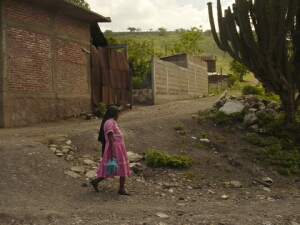 The local economy is based primarily on subsistence agriculture, with the primary products being corn, black beans, and squash. 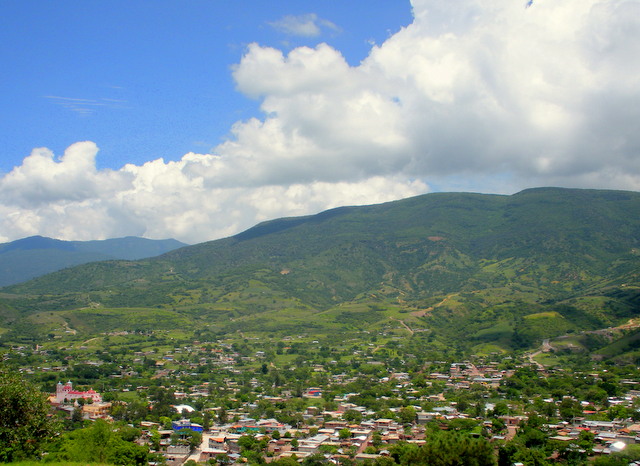 The women of San Vicente Coatlán are noted for their production of the “blusa chenteña”, a heavily embroidered blouse with 3/4 length sleeves. These blouses are made of cotton muslin with repeating patterns featuring animals, flowers and people, cross-stitched across the shoulders and the upper body. The woman in the pictures below is wearing this kind of blouse with the traditional skirt that goes with it.

Like many Zapotec languages San Vicente Coatlán Zapotec has different pronominal forms for first person inclusive and exclusive. This variety is unusual, however, in that it also has two first person dual inclusive pronouns, a familiar form and a respect form. The familiar form wa means ‘you (singular, familiar) and I’ (or ‘tú y yo’ in Spanish). The respect form una means ‘you (singular, respect) and I’ (or ‘usted y yo’ in Spanish).