Northern Oaxaca Nahuatl is spoken in a group of towns in the Sierra Mazateca of the state of Oaxaca. The principal towns of the area are Santa María Teopoxco, Santiago Texcalcingo, Vigastepec, San Bernardino, and Capultitlán. There are an estimated 12,000 to 13,000 speakers of the language.

The community of Santa María Teopoxco lies in the heart of the Sierra Mazateca in the state of Oaxaca. To the north, east, and south are communities where the Mazatec language is spoken. Towards the west is the region where other varieties of Nahuatl are spoken.

The people of the area relate that about 150 years ago the majority of the original inhabitants died in an epidemic. Later, others immigrated into the area and re-populated it. This is one of the reasons why this variety of Nahuatl is different from others.

Teopoxco is almost surrounded by Mazatec communities, whose customs are very different from those of the Nahuatl speakers. For instance, the Mazatecs do not use a yoke of oxen for plowing, but this is common among the Nahuatl-speakers of Teopoxco. The traditional foods are different as well: The Mazatecs like certain kinds of acidic or sour foods, while the Nahuatl-speakers prefer food spiced with chiles.

The people of Teopoxco normally plant their fields once a year, just before the rainy season, because they do not have an irrigation system that would let them grow crops year-round. Many of them leave the language area to work in other towns or cities because cash-paying employment is scarce in the community. 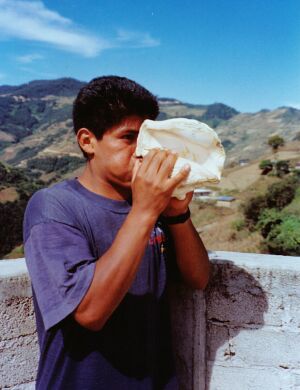 The tradition of using a conch shell trumpet is maintained in this community. The town authorities have it blown to call the people together in order to make announcements of general interest or importance. The town police officer is responsible to blow the conch shell, and it can be heard up to three kilometers away. When they hear the sound, the people begin to come to the municipal government hall. 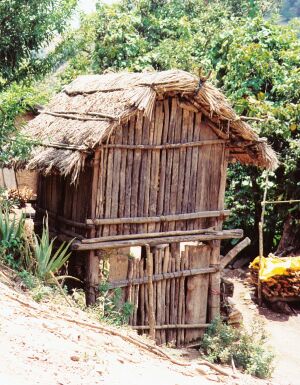 The people of Teopoxco use a special granary called (in Nahuatl) a kueskomatl or (in Spanish) a “cuescomate”. The ground in the area is generally damp and cold during more than six months of the year, and that is why this kind of granary must be used. It is elevated two or even three meters above ground level, which allows the bottom of the granary to be completely dry. If the grain were left on the ground it would be difficult to keep it from rotting. In these granaries the people store corn (maize), generally still on the cob, beans, vetches, squash, and even grass for animal fodder.

See the publications available on this site