Morelos Nahuatl, which like other varieties of Nahuatl is commonly called mexicano, is spoken in various towns and communities scattered throughout the state of Morelos. The most important towns are Cuentepec, Hueyapan, Santa Catarina, and Xoxocotla. Even though Tetelcingo is also located in the state of Morelos, its speech is quite different from that of the other Morelos towns.

The inhabitants of Cuentepec relate that their ancestors originally came from the citadel of Xochicalco, which is about 8 kilometers (5 miles) south of the current location of the town. Another tradition places the original location to the west, across the Tembembe river.

A pyramid in Xochicalco


According to the 2000 INEGI census the population of the Nahua speakers of Morelos is 18,656. 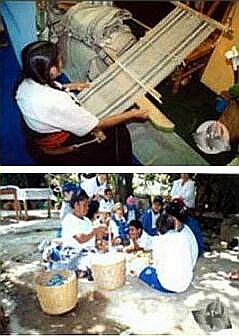 Hueyapan is famous for its production of beautiful woolen cloth woven on a backstrap loop, one of the most beautiful and ancient handicrafts in Morelos.

The women of Cuentepec and Hueyapan still wear their traditional clothing. In Cuentepec it consists of a pleated dress and apron.

The economy of the area is primarily based on agriculture. However, during the dry season, many people look for work in the surrounding areas and many men leave their town for seasonal work elsewhere in Mexico or in the United States. In Cuentepec, people grow mainly corn, beans, chiles and peanuts; Hueyapan is known for its cooler climate, more frequent rainfall and its variety of fruit trees. In Cuentepec, women and children collect wooden sticks to make small brooms that are sold in various market towns. Some of the elder women also produce pottery.

The pictures of Hueyapan are property of the Gobierno del Estado de Morelos, Secretaría de Turismo. Used by permission.